Looking beyond hunger: thoughts on SOFI 2019

This week, State of Food Security and Nutrition in the World 2019 charted just how off track we are to end hunger and meet global nutrition targets by 2030. With more than a quarter of the world population without regular access to nutritious food and insufficient progress on all forms of malnutrition, FAO DG José Graziano da Silva calls for "bold multisectoral action" and a redoubling of efforts to achieve SDG 2.

So, what does this look like? The SDG2 Hub asked leading thinkers Gerda Verburg of the Scaling Up Nutrition Movement and Elwyn Grainger-Jones of CGIAR for their reflections on the work to be done in the looming decade to 2030.

How do we drive a breakthrough on SDG2?

The need for a broader vision of SDG2 that captures this multifaceted goal in greater colour and complexity.

“SDG2 has a vision of zero hunger – and it’s a broader vision than just bringing more people above the minimum calorie line,” explains Elwyn. “SDG2 is also focused on improving micronutrient nutrition; getting agriculture back within environmental limits; doubling smallholders’ productivity and incomes; and maintaining ex-situ genetic diversity of crops, livestock, fish and their wild relatives. Each of these areas need a different breakthrough to secure success by 2030.”

“We must take a food systems approach to achieve SDG2,” reasons Gerda. “When we put nutrition at the centre of our food systems, rather than economic outputs, we are compelled to ensure first and foremost that people have access to a healthy diet. We need to shift our focus away from calories and quantity of food to focus more on quality, nutritious foods- and we need to reward farmers who put nutrition at the centre of their work.” 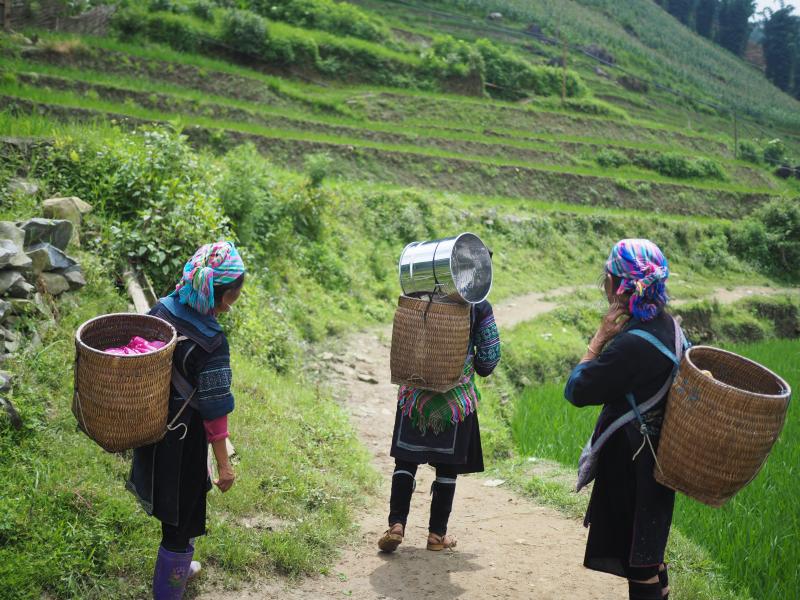 Improving access to resources is a priority to double incomes of smallholder farmers and help this important food actor and agriculture more generally to deliver on nutrition.

“A critical breakthrough here is a step change in the availability of diverse, climate-resilient crops varieties for farmers with the help of public-sector research and distribution working hand-in-hand with private sector,” highlights Elwyn. “Other breakthroughs to conquer this challenge include harnessing inexpensive information technologies to get real-time data and advice into the hands of farmers, and resource tenure reforms to allow local people to reap the benefits of natural capital solutions to climate change. Together higher incomes and a more diverse food supply can provide a major boost to the SDG target of universal micronutrient sufficiency.”

Ensuring women have access to a range of services so they can actively contribute to a vibrant agricultural system which delivers nutritious food is just as important to ensure success. Gerda explains, “In many parts of the world, women struggle to access financial services, extension services, fertilizer and land. Improving access for women is a crucial component of the solution.”

As inseparable systems, people and planet need to work in unison to deliver on food, nutrition and agriculture.

In keeping with a food systems approach, Gerda highlights, “there’s no trade-off between nature and nurture – people and planet can strengthen each other.” “Getting agriculture within planetary boundaries,” Elwyn adds, “needs a number of breakthroughs on the demand side, including rethinking diets and waste. There is also work to be done on reconnecting nitrogen cycles to keep farms fertile while rivers and coastlines remain unpolluted, and policy incentives that stop the spread of agriculture into biodiverse and high-carbon natural landscapes.”

Working together, these three food actors can drive real progress in achieving SDG2

With too much of a focus on food production and economic growth, Gerda states that governments need to redesign agriculture to sustainably produce nutritious and diverse food to enable access to healthy, nutritious diets and which leads to the health of people and planet. “The next generation of ministers should be given the responsibility of food systems so that they help drive a holistic approach to nutrition, food production, environment and health.”

For Elwyn, “The infrastructure is in place for a breakthrough on genetic diversity but needs solid funding. This isn’t a new idea - the Crop Trust has been advocating for this, but now the challenge is getting governments and the private sector to collaborate and secure those funds. Civil society groups, along with research entities like CGIAR, have a critical role to play in advocating for joined-up approaches that leave no body behind, and providing real-life demonstrations of how change can work at scale.”

Gerda points to the Committee on World Food Security - Voluntary Guidelines on Food Systems and Nutrition as a potential space for collaboration.  “This is an excellent space for business, civil society and government to join hands on this issue and together promote sustainable food systems that improve nutrition and enable healthy diets.”

With the findings of this year’s SOFI report still ringing in our ears, Gerda reminds us that “the complexity of today’s food production systems means that everyone is involved – from the private sector to small scale farmers, food producers, consumers and government. Now is the opportunity to join forces and bring players together to improve food systems and improve nutrition for a win-win on SDG2 – and on SDG 3 (health and wellbeing); 4 (education); 5 (gender) and more.” 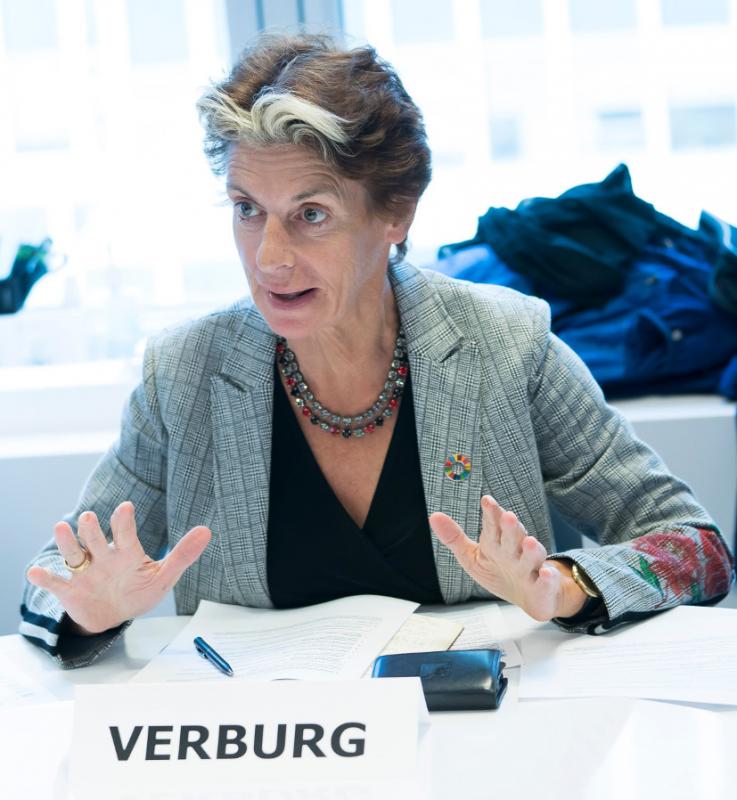 Since August 2016, Gerda Verburg has served as UN Assistant Secretary-General and Coordinator of the Scaling Up Nutrition (SUN) Movement, working with the 60 country governments and 4 Indian states that lead the SUN Movement, united with UN agencies, civil society, business and donors, in a common mission to defeat malnutrition in all its forms. She was appointed by the UN Secretary-General based on her extensive experience in politics and international cooperation. In 2008, following her appointment the previous year as Minister of Agriculture, Nature and Food Quality of the Netherlands, Ms Verburg was elected as Chair of the UN Commission on Sustainable Development (CSD 17). From 2011, she served as Permanent Representative of the Netherlands to the United Nations Rome-based agencies (FAO, IFAD and WFP). In 2013, she was elected as Chair of the UN Committee on World Food Security (CFS), and in 2014 she served as Chair of the Agenda Council for Food and Nutrition of the World Economic Forum (WEF).

The UN Secretary-General, António Guterres, renewed her term as Assistant Secretary-General and Coordinator of the Scaling Up Nutrition (SUN) Movement for a second term, effective from August 1 2018. 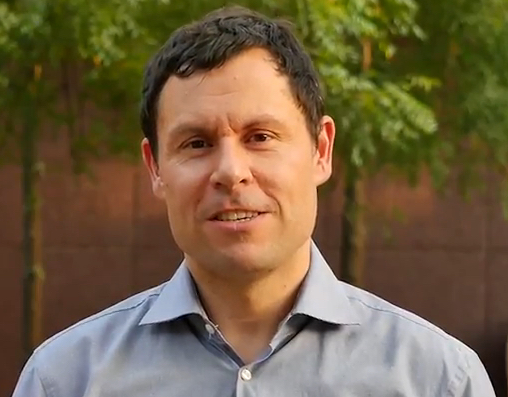 Elwyn Grainger-Jones began his career as an Overseas Development Institute (ODI) fellow in Guyana in 1993, following his studies in economics at the London School of Economics and the University of Warwick. After ODI he joined DFID, where he held various positions and worked inSouth East Asia leading the trade policy team.

During a three year leave of absence, Elwyn worked as the World Bank's trade representative in Geneva, where he led a one-year World Bank study on export diversification in Botswana, and spent a year helping the EBRD develop its poverty impact assessments. He thenreturned to DFID to establish and lead its Climate and Environment department.

In 2009, Elwyn joined the International Fund for Agricultural Development (IFAD) as Director responsible for IFAD's Environment and Climate Division before serving as Director of Policy and Operations at the Global Environment Facility.