On 12 January, the SDG2 Advocacy Hub hosted ‘The Great Protein Debate’ Webinar in collaboration with CGIAR, with the goal to enable an open discussion about protein, especially in the lead up to the UN Food Systems Summit (UNFSS) to take place in 2021. The main message of the event was that there is no one-size fits all protein solution. Too often, discussions become caught in different perspectives and camps, rather than to allow for open-minded perspectives and constructive, forward-thinking inputs. The conversation during the Webinar boiled down to the crucial importance of a nuanced perspective and analysis, including on the role of protein in our food systems.

The Webinar began with high-level remarks by Dr. Lawrence Haddad, UNFSS Action Track 1 and Dr. Gunhild Stordalen, UNFSS Action Track 2 Lead, and in its second part featured a panel discussion, moderated by Paul Newnham, Director of the SDG2 Advocacy Hub with panelists Dr. Namukolo Covic, Senior Research Coordinator from IFPRI for the CGIAR Research Program on Agriculture for Nutrition and Heath (A4NH), Dr. Kanayo Nwanze, CGIAR UNFSS representative, as well as Chef Conor Spacey, from Ireland, and Chef Selassie Atadika from Ghana, who are both part of the Chefs' Manifesto. Dr. Nwanze in the end wrapped up the Webinar with closing remarks.

The topic of the debate was loosely based on an article written by Dr. Haddad, and driven by the themes of Action Track 1 and 2, ensuring access to safe and nutritious food for all, and shifting to sustainable consumption patterns. This conversation was especially important in the lead up to the 2021 UN Food System Summit (UNFSS), convened by the UN Secretary-General, to launch bold new actions to transform the way the world produces and consumes food, and to deliver progress on all 17 Sustainable Development Goals.

During his address, Dr. Lawrence Haddad, an economist by training, and the Executive Director of GAIN, the Global Alliance for Improved Nutrition, highlighted that issues today, including the role of protein in food systems, are extremely complex. He talked the audience through tradeoffs and synergies between the production and consumption choices of different animal sourced foods, categorised into health outcomes, environmental outcomes and livelihood outcomes. This helped simplify the problem at hand and thereby provided a great starting point to the later discussion.

“Nuance is our friend, ideology our enemy” 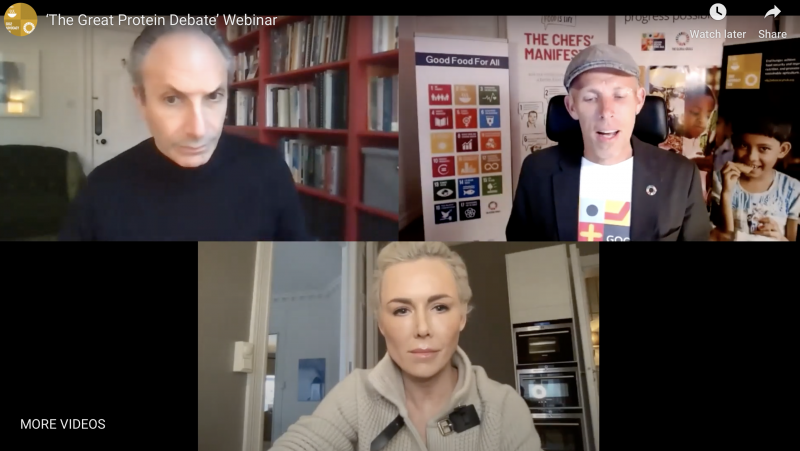 The second keynote speaker and great champion of food systems, Dr Gunhild Stordalen, is the founder and executive chair of the EAT Foundation . During her address, she outlined three pathways to sustainability in the area of protein. Firstly on the production side, it is all about reducing the climate impact of meat and animal based proteins. On the consumption side, what is necessary is a shift of consumer behaviour. Finally, on the innovation side, it is crucial to diversify and not shy away from adding plant-based and other alternative proteins to the mix.

“Meat is not the problem. The problem is its overproduction & overconsumption in certain parts of the world”

The challenges to fix our food systems are immense, as Gunhild pointed out. No single sector or technology can address the issues alone. But the UNFSS, for which Gunhild is heading up Action Track 2, offers a unique opportunity for the world to unlock synergies and opportunities, to drive solutions needed to make truly good proteins available for everyone, everywhere.

Paul Newnham started off the discussion by asking everyone what they had for breakfast – as it turns out a fascinating mix of different proteins! He then went on to ask the two chefs how people in their parts of the world approach adding protein to their diets. Chef Conor Spacey pointed out that in the Irish context, it is important not to label dishes as vegetarian or vegan, as this can be off-putting to the customers. Instead, he is just describing dishes as what they are, and especially working to champion plant-based proteins as the center of his dishes – for nutritional and especially also for environmental reasons. Chef Selassie Atadika agreed and added that e.g. in Ghana, status and class are also important aspects of consumer choices when it comes to protein. When experimenting and planning her menus and dishes, Chef Selassie considers a) community, b) cuisine and c) culture, and always considers environmental and economical aspects. She likes to buy into the local economy, supporting livelihoods and biodiverse ingredients, and finds that treating vegetable with the same amount of respect as meat, helps to change perceptions.

Paul then brought in the two CGIAR experts. Dr. Namukolo Covic shared that generally, protein consumption in Africa is still limited, especially amongst the poor and that food safety issues around infrastructure and food handling are extremely important. Problematic are bacterial and viral contaminations, chemical hazards, pesticides, and more recently antibiotics in livelihood production. She explained that due to its micronutrient content, animal protein consumed in small amounts can have extremely beneficial nutrient outcomes and can even lower the cost of diets in low and middle income countries, according to research conducted by the WFP. She stressed again that those that need to increase their animal protein consumption and nutrient intake, should be able to do so, while others, who eat too much, should reduce it, even within the African context.

“We mustn’t forget we have different populations and contexts, and there are areas where producing livestocks is part of the cultural settings - and in some desert and arid areas this (livestocks) is the only livelihood, the predominant sustenance in terms of nutrition.”

Turning to Dr Kanayo Nwanze, who has had a long history of working with smallholder farmers, the discussion then evolved around the importance of ag research and innovation. Dr Kanayo stressed that in many parts of the world, especially in low and middle income countries, animal sourced foods are the main sources of protein, often enhanced by plant-based  proteins such as beans. Livestock, in this context, plays an incredibly important role for livelihoods of smallholder farmers and directly correlate with better sources of employment, higher incomes, better education opportunities and so on. He also pointed to the important dimension of policy. Dr. Namukolo added to this by sharing that policy is often biased towards staple food production and that not enough attention is given to livestock production and productivity. For example a glass of milk can cause very different amounts of emissions depending under which conditions of productivity it has been produced. One crucial problem, Dr. Namukolo stressed, is missing cold value chains – an area where a lot of effort is required to create an enabling environment for different value chains to be developed.

Dr. Kanayo then stressed that transforming food systems is crucial to reaching SDG2, and that research in turn is the starting point of this transformation. This, Dr. Kanayo explained, is exactly what the CGIAR is striving to do. Feeding people well, he said, is as important as feeding people enough. And agricultural research allows interventions to be diverse, prioritised, targeted and to deliver solutions at local levels and at scale. Relatively, agricultural research in the area of livestock has received very little funding in the past decades (both internationally and nationally), especially considering its importance as described above.

In his closing remarks, Dr. Nwanze once again called for the importance of nuance and a holistic view including on health, nutrition, livelihoods and environment. He stressed once more how meat eating is not the problem, but rather the overproduction and overconsumption of it in some parts of the world, and underconsumption and underproduction in others. Geography and income, he highlighted, matter. High, middle and low income countries need to take different actions. We need to think globally, act locally, and actions have to be context specific. Finally, Dr. Kanayo stressed, a radical alignment of food systems around the world is necessary, primarily through research and innovation, which drive such a transformation.

CGIAR is a global partnership that unites international organisations engaged in research about food security. CGIAR research aims to reduce rural poverty, increase food security, improve human health and nutrition, and sustainable management of natural resources. This year, CGIAR is transforming itself, addressing a broad range of issues across the development spectrum, and formulating a new research innovation strategy to accelerate achievements of the system. Find out more. The International Livestock Research Institute (ILRI), a CGIAR research center, works for better lives through livestock in developing countries. ILRI is co-hosted by Kenya and Ethiopia, has 14 offices across Asia and Africa, employs some 700 staff and has an annual operating budget of about USD80 million.